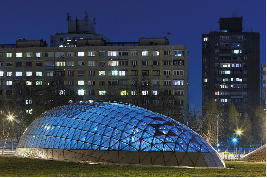 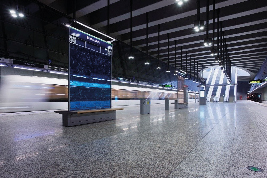 The Bikás Park Station is one of the smallest stations of the new M4 metro line in Budapest. It can be considered a prototype for other stations of this line, which shows the main architectural solutions. The station is located in a corner of a large park, the main entrance is built as a glass dome with backlight. The dome has a thin lightweight construction installed above the platform, and consists of a mesh of glass and metal triangles. The main finishing material for the station is unplastered architectural concrete. Roughness of concrete surfaces is combined with fine finishing of steel and glass structures, as well as with hardscape and handmade objects. The graphic design of the station – flowers on fiber-concrete sheeting and flying seeds – correlates with the park on the surface. The new station, surrounded by rather boring residential blocks, became a vibrant architectural structure for the area. 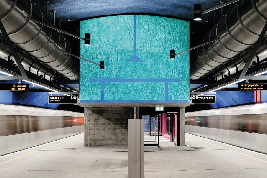 The station is located in Loren, former industrial area, which in recent years became an attractive residential area that needed a new metro station for further development. The station is located at a depth of 27 m and is equipped with stairs, escalators and elevators. The main lobby consists of a technical part made of concrete and a public part made of steel and glass. Large steel ceiling beams allow to avoid columns, and the station seems more spacious and open. The station hall is a natural dome-shaped mountain tunnel with a platform in the middle. The station’s technical equipment is not concealed, but instead emphasized, constituting a part of a design solution that forms a powerful industrial atmosphere in accordance with the area identity. 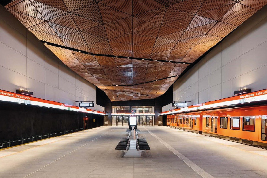 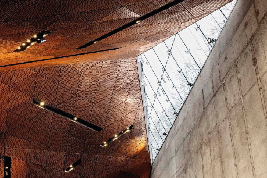 The architects had the task of creating a vivid station identity associated with its area. The new metro line, which includes the station, connects Helsinki and Espoo with the university town of Otaniemi. Aalto University Metro Station is located in the very center of Otaniemi, and its main gate leads directly to the university building. The most distinctive design decision is the application of a rich palette of materials that emphasize natural materiality. The station ceiling is made of COR-TEN steel panels, visually congruent with the surrounding red brick buildings. The aged lining of dark copper sheets, gray granite and COR-TEN steel panels form the basis of the material palette for the entrance pavilion superstructures.