The winners of the competition 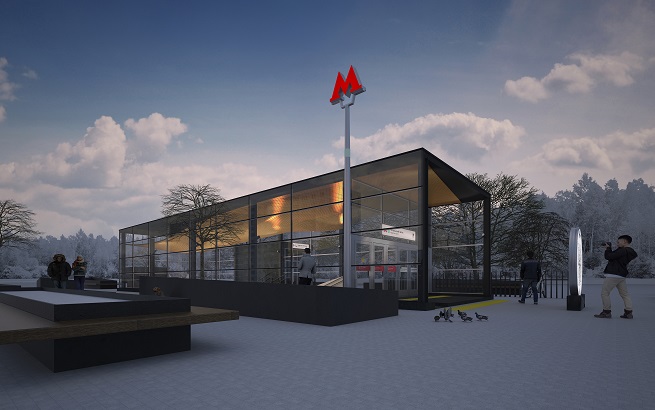 The winners are:
The concept for the Nagatinsky Zaton station designed by za bor Architectural Workshop is an attempt to consider a transport infrastructure facility as a museum dedicated to the inhabitants of the rivers of the Moscow region and, in particular, the Nagatinsky Zaton backwater. The architects have proposed decorating the station walls with large realistic images of fish. They will be made of natural stone using a mosaic panel technique. The wall in the ticket hall area will feature images of different fish species depicted with encyclopedic accuracy. Each species will have a brief description.

ARCHSLON Architectural bureau entered the competition with a concept that transforms the Klenoviy Bulvar metro station into a seamless extension of the cultural context of the area. For example, the shape of the entrance lobby is a modern rendition of the domes in the palace of Alexei Mikhailovich in Kolomenskoye. Lighting fixtures in the underground entrance lobby refer to the culture of textile ceramics, which was well-developed on the territory of the Dyakovo Gorodishche in Kolomenskoye. The interior decor of the station employs white and black granite, patterned in layouts with varying ornamentation.

The competition’s qualifying phase saw over 50 entries, and of them 10 were submitted by international consortia, including experts from Argentina, the UK, Hungary, Israel, Italy, Latvia, the Netherlands and Ukraine.   In the first phase, the professional jury shortlisted 5 finalists for each station. The selection was based on an entrant’s application, relevant portfolio, essay and proposed visualizations. In the second phase, the contestants were given 1.5 months to bring their ideas in line with the terms of reference for the stations and then showcase their designs at the jury’s final meeting.

The best design projects were singled out using the following criteria: integration in the district heritage and location of the stations, compliance with the requirements for comfortable and safe movement for all passenger categories; economic feasibility and, of course, the possibility of their practical implementation considering the technical requirements of the Moscow Metro.

Marat Khusnullin, Deputy Mayor of Moscow in the Government of Moscow on Urban Development Policy and Construction “Each station of the Moscow Metro should be one of its kind – this is our principled stand. For this reason, we took a decision to build stations based on standard structural designs, as this enhances a construction’s cost efficiency, but the appearance of each station should be individual. Architectural competitions help find the best design solutions for exteriors and interiors of new stations."

Mars Gazizullin, CEO JSC Mosinzhproekt “In four years, Mosinzhproekt has carried out three competitions that have defined the design for seven new metro stations. We can now summarize the results of the fourth competition, where participants proposed design projects for another two stations in the Bolshaya Koltsevaya Line. And we are very optimistic in our conclusions because the quality of entries, achieved to meet the terms of reference and tough metro requirements, has much improved, and this has driven the creation of outstanding projects and a fresh look at the architecture of the Moscow Metro. We firmly believe that the submitted concepts will be successfully made a reality, and the new stations will be ranked among the brightest jewels of the Moscow Metro, as its many other stations that have become architectural classics. In addition, Moscovites will see already this year the results of the first competition, which will be put into practice in the stations of the Kalininsko–Solntsevskaya Line – Novoperedelkino and Solntsevo.

Sergey Kuznetsov, Chief Architect of Moscow: “We are no longer constructing ‘palaces’, but our capital’s metro stations still represent a great architectural phenomenon. We owe this, above of all, to the competitions that generate brilliant ideas, and to Mayor Sergey Sobyanin who does everything to improve the image of the metro. Today's finalists, who developed design projects for the metro stations of the Bolshaya Koltsevaya Line, have not only come up with interesting concepts, they were able to reach the perfect balance between technology, cost-efficiency and site identity. za bor Architectural Workshop envisioned the Nagatinsky Zaton station as a museum featuring the inhabitants of the Moscow rivers. The walls will be embellished with large realistic images of fish, made of natural stone in the technique of “Florentine mosaics”. And the Archslon bureau harnessed the close location of the Kolomenskoye Estate as its core design idea, and this why the entrance of the ground pavilion at the Klenoviy Bulvar station has a shape resembling a church dome”.
✕